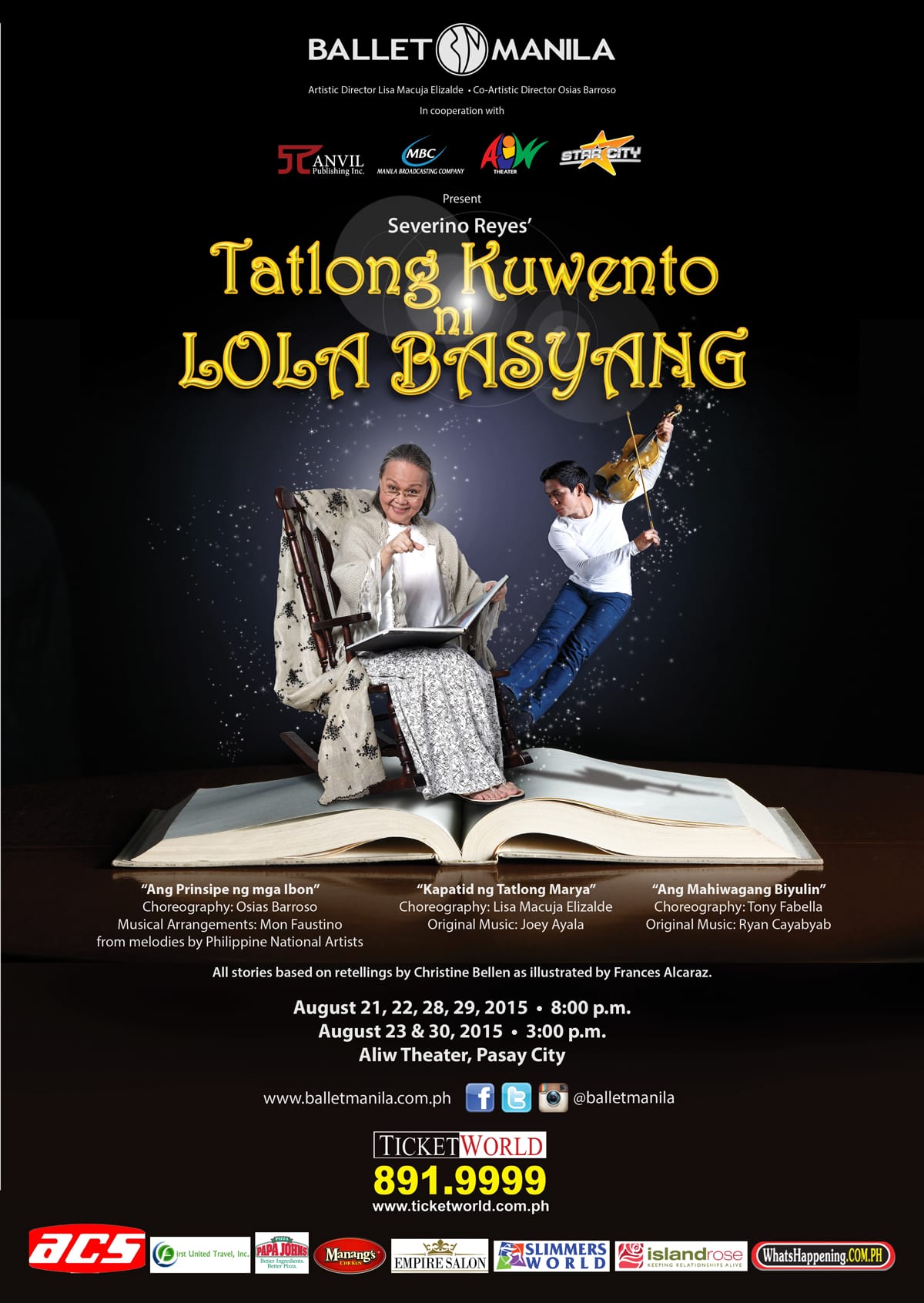 Lola Basyang was the pen name of Severino Reyes the former editor of the famous Tagalog magazine Liwayway back in 1925. In between running the
publication he penned enchanting tales about magical kingdoms and strange creatures. The stories were published in a section called “Kuwento ni Lola Basyang.”
Reyes wrote over 400 well-loved tales and generated a huge following among magazine readers. Apart from the magical twists, the stories impart heart-tugging lessons on good morals and values which appeal to both to children and adults.Ballet Manila brings back the storybook magic of “Ang Prinsipe ng Mga Ibon,” “Ang Kapatid ng Tatlong Marya” and “Ang Mahiwagang Biyulin” on its 20th performance season.
Choreographed by Osias Barroso; set to the melodies of national artists for music as arranged by Mon Faustino, “Ang Prinsipe ng Mga Ibon” is about a princess who falls madly in love with a bird prince. Their love is put to a test when her furious father expresses disapproval over their unusual relationship.
Ballet Manila Chief Executive Officer and Artistic Director Lisa Macuja-Elizalde choregraphed “Ang Kapatid ng Tatlong Marya”. Set to the music of Joey Ayala, it tells the story a boy in search of his three sisters who were captured by a beast, as a punishment for their father’s greedy streak. The boy strives to fulfill their father’s dying wish by coming face to face with the monster that took his sisters.
“Ang Mahiwagang Biyulin.” was choreographed by the late Tony Fabella with music by Ryan Cayabyab. The tale is about a poor worker who was given a violin when he helped an old lady. The enchanting rhythm of the strings sends listeners in a trance bringing about an unusual change in behavior.
“Lola Basyang is part of the Filipino our culture and heritage,” explains artistic director Lisa Macuja-Elizalde. “We at Ballet Manila are honored to do our share in preserving this wonderful gift, through dance and music.”
For the choreography of “Ang Kapatid ng Tatlong Marya”, Lisa was immediately moved by the children’s book published by Anvil Publishing, a re-telling of the Severino Reyes story by Christine Bellen, with illustrations by Frances Alcaraz. The music of Joey Ayala further immersed her creative mind allowing her to recreate the story as a dance sequence.
“Joey Ayala gave the music to me piecemeal. First was the Underwater section and family section so I was able to do the sea creatures scene and 3 Marias variations right away which were very classical in structure and choreography. Pedro’s, the main character’s solo, is by Gerardo Francisco as I preferred that a man do the choreography for Pedro. And the entire Lion’s section corps is done by Ernest Mandap who was visiting from France at that time.”
Of the three Lola Basyang stories that would be presented, Lisa singles out “Ang Kapatid ng Tatlong Marya” as the most challenging in terms of production. “We had to tell the story – and that meant many scene changes, costume changes and a huge cast of characters. My ballet I think was the most expensive of the 3 ballets in that aspect. I think the most difficult part was when we had to do the three kingdoms as each kingdom was so different in treatment plus dealing with a huge cast of children, students, scholars and professional dancers.”
She enjoyed creating the family scene, describing it as the most “classical” of all sections. “ I had fun doing the solo variations of the three Marias and the family dance. I love the snake and tree scene because it is so unexpected and dramatic. I also like it when the live animals are pushed onstage, again because it gives an unusual touch to the ballet,” she shared.
Tatlong Kuwento ni Lola Basyang promises to be the perfect weekend treat for the whole family. “The kids will like the snake scene and all the live animals on stage.
I also tried to be as “storyteller” as possible – I wanted the scenes and story to be briskly told. Pacing is key. The trilogy is a good experience that needs to be shared by the whole family.” she said.
“Severino Reyes’ ‘Tatlong Kuwento ni Lola Basyang’” goes onstage at Aliw Theater on August 21, 22, 28, and 29, at 8:00 p.m., and on August 23 & 30 at 3:00 p.m.
The show is co-presented by Manila Broadcasting Company, Anvil Publishing, Aliw Theater and Star City. Other sponsors are ACS Manufacturing, First United Travel, Papa John’s Pizza, Manang’s Chicken, Empire Salon, Slimmer’s World, Island Rose, and whatshappening.com.ph.
Tickets are available at Ticketworld outlets, www.ticketworld.com.ph, or call 891 9999 and the Ballet Manila marketing hotline at 552 7502.